Traveling Alone in Cambodia. This was one of the best trips of my  life!

After reading online accounts of marauding monkeys and menacing mosquitoes, I headed out to Siem Reap, Cambodia< I had undertaken all the planning of a major military campaign.

I quickly traded my holiday cocktail dresses for Bugs Away sportswear.  I was fully prepared for every contingency. After my arrival, I found that all my concerns were in vain. I attracted the attention of only one lone mosquito during the entire 17 day trip. As to “stalking” animals? On my solitary encounter with monkeys, I had to seek them out for a photo opp and went totally unremarked upon! 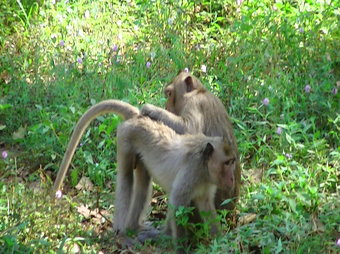 I still believe that researching ahead of solo adventure travel is important. However, I am glad that contingency planning did not deter me from taking this trip of a lifetime. What did I find in Cambodia? Warm and friendly Khmer residents. In addition, being a tourist was very easy. English was widely spoken, and US dollars accepted everywhere.

After booking my flight to Siem Reap, I quickly learned that it is Cambodia’s busiest airport. The reason? Its proximity to Siem Reap. I had failed to follow my general practice of booking an airport transfer. As a result, I was pleased to find a well-priced and quick airport taxi service to my hotel.

Although there is plenty to see in Siem Reap over 2-3 days, I had just one day before joining a river cruise. Siem Reap roughly translated refers to the defeat of Siam (modern day Thailand). This complex interwoven history is exemplified even now. In Bangkok , I saw in the Grand Palace a model/replica of Angkor Wat. The  latter was controlled by Siam for 400+ years.

After looking at various guided tour options, I circled back to my airport driver, Phao Lem, whom I highly recommend for day or local tours. He was able to tailor a private independent day tour for me in an air conditioned Lexus sedan. This was the perfect solution since I quickly experience information overload when going with large, generic tours. That left me free to go at my own pace, guidebook in hand, with the flexibility to head off, away from the beaten path. This also was less expensive while providing a wider array of options. 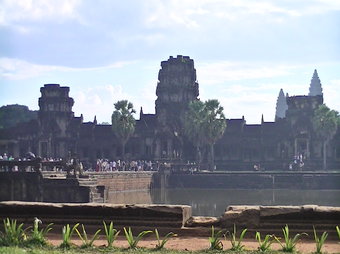 I quickly learned two new facts. Angkor Wat is only part of the Angkor Archaeological Park, a UNESCO World Heritage Site. The region has multiple “Wats” or temples covering six centuries. Secondly, Angkor Wat and certain nearby temples, although Buddhist from the 15th century, were founded as Hindu temples, seen in multiple surviving carvings. 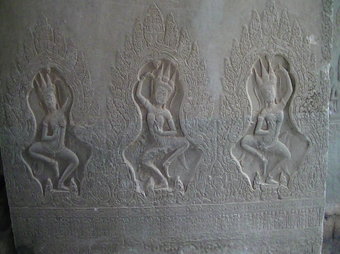 A few practical considerations: Like the Forbidden City in Beijing, the complex has no shade trees. This makes for a steamy hike up  endless staircases. Hand rails are sometimes absent requiring a mountain goat’s sure-footed approach. In any case, it was well worth it but do plan on having sunblock, a hat/vizor and bottle of water at the ready. Better yet, bring a battery-operated hand-held fan or buy a “traditional” one from the thriving adjacent market.

More things to see and do in Siem Reap:

Next on the agenda for me was the large Angkor Thom complex. This city was the ancient Cambodian or Khmer capital.  Easily recognized by fans of Laura Croft: Tomb Raider, it contains multiple ruins. Unfortunately, little of the Royal Palace at Angkor Thom has survived although it is bordered by the well-preserved and highly photogenic Terrace of Elephants. 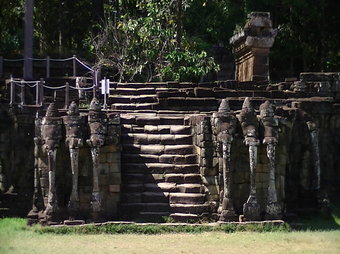 The next local  temple of renown is the Bayon. I was especially intrigued with its 200+gargantuan  faces carved in stone. A nearby bridge features this same motif  with its massive arch bearing a timeless face peering down on modern-day travelers.  A real traffic jam resulted as fellow tourists dodged cars and motorcycles to capture the best photo opp! 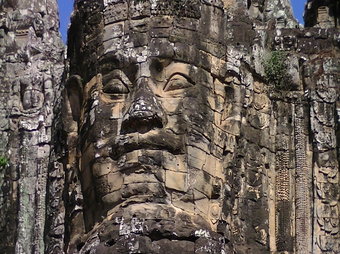 My next stop, Baphuon, like Angkor Wat, was built as a Hindu temple and only became a Buddhist temple in the 1400’s. One caveat: There were many, many steps to reach the third, top level. Having saved Baphuon for the latter part of the morning, I was daunted by the prospect of scampering up all three-tiers but found the 2nd level view well worth it!

One special feature of my private tour was having lunch in a local cafe where I shared a table with a fellow solo traveler from Australia. There was just enough time remaining to lounge in a hammock outside and catch my breath for the afternoon’s sightseeing.

After lunch, I followed again in the footsteps of “Laura Croft” exploring the temple of Ta Prohm. It is best known for the enormous trees still growing out of the roof and the internal ruins. It  makes an ideal setting for photographers and for staging adventure films.

If you haven’t had enough sightseeing, you can trek up to see the sun set at Bakheng Mountain or wind along the path on elephant-back. (While traveling in the region, there are many exotic animals that delight tourists. However, it is always important to be aware of whether they are being cared for in keeping with local conservation requirements.) 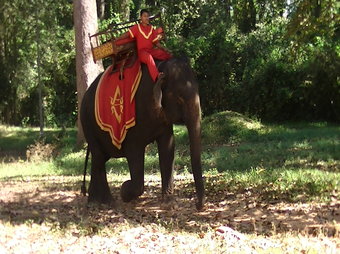 A trip to the nearby lake, Tonle Sap, is the perfect end to a Siem Reap visit. Unfortunately, the January water level was too low for me to connect there as I ventured ahead on a river cruise through Cambodia and Vietnam. 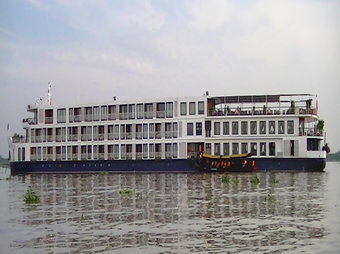 Please join me as I move ahead to celebrate New Year’s Eve in the vibrant capital of Phnom Penh.

For more on my personal Cambodian journey, see Alluring Ancient Cambodia and 5 Tips for Traveling alone in Cambodia (solotrekker4u.com).

Explore our Traveling Alone in Cambodia solo travel packages for Asia and the Pacific Rim.  For other options, please go back to our home page. Use our Booking.com search box for specials up to 42% off. Be sure to check out the verified solo travel reviews.