With the current travel restrictions at home and abroad, most of us in the short-run will only have staycations to consider. One benefit of staying close-by is to explore lesser known “gems” in our own backyards. Having lived most of my life in Washington, DC, I am often surprised to find how many unknown special places there are that don’t make the typical travel guides. The White House, the Capitol, Mt. Vernon and so many public monuments are always at the top of everyone’s list. However, the city is filled with many less well-known statues and buildings. In the past, the Washingtonian magazine had a scavenger hunt that had local residents racing around town to identify buildings that matched up with a series of small photos.

One added resource comes from the many foreign embassies based in DC. Increasingly in the last 5 years, many embassies now proudly display a statue of the country’s founder or other leading patriot. The Brazilian statue of Alberto Santos-Dumont is so lifelike in walking by in the evenings it looks like there is someone standing on the corner! My dog would not have it when confronted with a very large statue in front of the Bulgarian embassy. It stood on a pedestal giving the impression of a really, really tall looming figure.

What I find intriguing is the number of small parks that dot the city. One of the larger ones is the tranquil Kahlil Gibran Park on Mass. Ave.  Nearby a much smaller park is nestled in a small triangle where two streets cross. It pays tribute to the 19th-century Irish patriot, Robert Emmet. A few blocks farther down Mass. Ave. a statue  stands proudly honoring Tomáš Garrigue Masaryk, the “George Washington” of Czechoslovakia.

As a child, I remembered all the monuments but was especially intrigued by the National Cathedral, an architecturally authentic replica of the 13th century and the Islamic Center (the “Mosque”). The latter has glittering mosaics in an internal dome and a tall minaret where the muezzin makes the call to prayer.

Here are some of my favorite local “gems”. 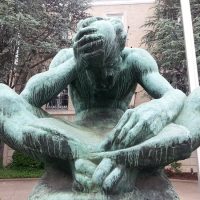 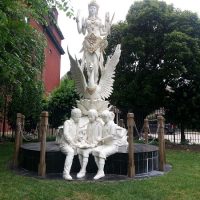 Adjacent to the Indonesian Embassy stands a remarkable 16 foot statue of the Hindu goddess, Saraswati. 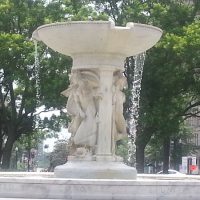 Dupont Circle is dominated by an imposed statue dedicated in 1921 sculpted by Daniel Chester French. It is now one of the most popular spots in DC for gatherings, local cafes and city living in row houses and apartments. 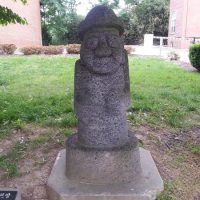 This is one of my special favorites. Known as Dol hareubangs they come from the Jeju Island, just off South Korea’s southern tip. These gentle, grandfatherly figures are credited with offering protection.  I discovered them out strolling with my dog. They mysteriously appeared and just as suddenly disappeared with no fanfare. I asked at the nearby local cultural center where they went. No one knew! I am glad that I captured their photos before they disappeared. 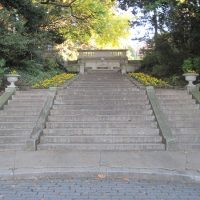 Built in 1911, the “Spanish Steps” are often the site of informal weddings. It is a DC park but lovingly maintained, in part, by its neighbors. While not as tall as the original “Spanish Steps” in Rome, Italy, it is nestled in a residential rather than a commercial area which is known as the Sheridan-Kalorama Historic District. The “Steps” serve as a connection between the intersection of Decatur Place, NW and 22nd St NW and at the top, S Street. The latter is home to many elegant embassies’ residences for their ambassadors and an expansive home recently renovated byo Amazon.com Founder Jeff Bezos. 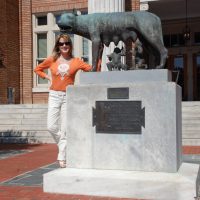 From Rome, Georgia: A copy of the She-Wolf, the original sits in Rome, Italy’s Capitoline Museums.  It depicts the legend of the founding of Rome. The twins, Romulus and Remus, were saved by the she-wolf when their great uncle overview their grandfather and ordered that they be drowned in the Tiber River.  Unfortunately, when the twins were grown and Rome was founded, the history of brother killing brother repeated itself when Romulus killed Remus. 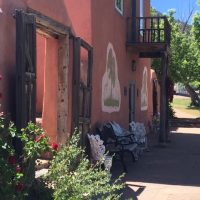 (Note from Solo Trekker: We found there is much to see there. The Center has extensive gardens and 190 species of birds plus the historic Randall Davey House. The Center covers 135 acres and offers both natural beauty and an artist’s studio. The latter is filled with murals and original furnishings as well as a surprise: A hidden bar dating to the prohibition era!

If you have hometown gems you would like to recommend, please email me directly at our Contacts page.