Traveling to Jordan Solo Travel Jordan: As the picture below shows, Jordan is a combination of the present day and its ancient past. It has a mix of Nabataean, Greek, Roman and Arab culture.  That made for a really fascinating trip. (Before you head out, please check out our late Sept 2017 launch of our new free software tool, the “Solo Travel Pricing Tracker” only available via a tab at the top of the home page of SoloTrekker4U.com.) 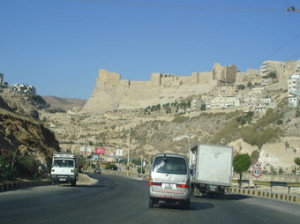 Jordan has been a crossroads since ancient times with monuments from four separate cultures. Ruins draw countless tourists to Jerash and Petra, the latter featured in Indiana Jones and the Last Crusade. Its climate can range from hot in the summer to light snow in winter, especially in the mountains.

Notwithstanding its long history, Jordan is also very modern, dubbed by some as the Mideast’s “Silicon Valley”.

My solo travels through Jordan were limited to the week. I had just time  before and after a conference in Dubai. As a result, I had to make the most of each day there.

The next day the highlight of my visit. My driver and I were off early to the Nabataean rose city of Petra. 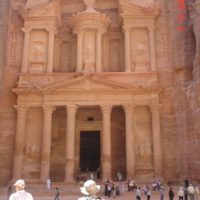 The final day in my initial trip demonstrated vividly the rich blend of Jordanian history.

I had to press on to attend a conference in Dubai without getting to see more of the countryside.  When I return, I plan to spend more time at the Dead Sea, in Aqaba and Wadi Rum, the latter providing a view of the Bedouin lifestyle.

Like Egypt, Jordan has diplomatic relations with Israel. Solo travelers and other tourists are able to combine a visit to both countries in one trip.  That can be a good way to explore the deep religious and cultural history of the region with time remaining for the beach, hiking and sampling top cuisine. Solo travelers will find a fascinating mix of a world that is both ancient and timelessly interwoven with the 21st century. (It may not be possible, however, to travel directly from Jordan to the West Bank. Be sure to plan ahead.)

For more options for Solo Travel Destinations Traveling Alone in Jordan, go to our home page. Use our Booking.com search box for specials up to 42% off. Be sure to check out the verified solo travel reviews.