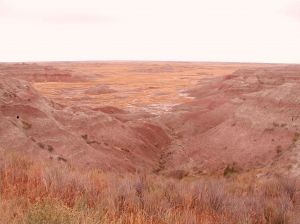 (For wide-ranging options for lodging, go to our free search tool, the SoloTravelPricingTracker.net

Choose North America and then select from budget to luxury hotels, relaxing spas or horseback riding at dude ranches.)

Having traveled now to about 68 countries, I previously wanted to finish seeing all 50 of the United States by making a visit to both of the Dakotas. As classic movie fans will recall, the region’s most famous film, Alfred Hitchcock’s North by Northwest, had spell-binding footage (enhanced by Hollywood sets) of Mount Rushmore: Cary Grant hung off the side of a rocky cliff and then later dashed down the face of  the immense carved faces of four leading US Presidents. He was hotly pursued by a team of gun-toting villains and foreign spies. In real life, Mount Rushmore and South Dakota’s Black Hills provide a lot of entertainment options but fortunately not those involving such death-defying feats.

Although most of the local sights are open year-round, I recommend a visit from spring to fall unless you like touring in really cold weather. The only downside I found was that it was not easy to get there. From Washington, DC, the best flights overshot the Plains States arriving in Denver and then flew back eastward to Rapid City. (In journeying on to Bismarck, North Dakota, I had to retrace my steps again going westward to Denver and then back eastward.)

Coming from the largely industrialized, densely populated, hilly East, my first impression was of the flat terrain, the open spaces and the sheer distances. The Dakotas evoke the fabled names of a bygone era of the Old West:  Crazy Horse, Sitting Bull, Custer and Wild Bill Hickok. In keeping with that romantic image, I selected an in-town hotel that picked up on that tradition:  The Hotel Alex Johnson. It had a local flavor rather than the feel of a modern chain and was walking distance to shops and restaurants. On the weekend, I wandered through the downtown street fair and joined a family style lunch outside. For a solo traveler. I was really pleased to see ho warmly friendly everyone was.

As I expected, the highlight of the trip for me was a day shared between Mount Rushmore and Crazy Horse, outside of Rapid City, making for a great full-day trip. Rather having to rent a car, I found multiple local bus tour options. I made my way first to Mount. Rushmore which opened in 1941. With almost three million visitors per year, Mount Rushmore features one hundred and fifty years of American history from George Washington and Thomas Jefferson to Abraham Lincoln and Teddy Roosevelt.

On my arrival, in addition to United States tourists, there was a diverse international flavor with German being the leading foreign language heard.  Connecting with a local guide, there was a lot to be learned. The reason for the recessed carving of two of the four presidents was a surprise:  Rather than chronology or other intentional ranking, this sequencing was required because the surrounding stone had been too soft to support the permanent carvings.

Nearby, and also open year-round, are the Crazy Horse Memorial and the Indian Museum of North America. Begun in 1948, the Memorial is still under construction. However, the sculpture of the face of Crazy Horse, completed in 1998, dominates the horizon. Privately funded, the Memorial is projected upon its completion to feature the world’s largest outdoor sculpture. The story of its founding is a remarkable example of the initiative of the Lakota leader Chief Henry Standing Bear, a cousin of Crazy Horse, and their partner, Korczak Ziolkowski, a Boston born Polish-American orphan who became a distinguished sculptor. After his death in 1982, his wife and seven of their children continue to lead this challenging effort to complete the Memorial. Their home on the grounds of Crazy Horse still has a Victorian flair augmented by a unique flavor of Boston and Poland.  Visitors today can also meet skilled craftsmen and designers whose unique jewelry is on display at the Native American Cultural Center.

Moving forward, South Dakota with six national parks plus its own state parks offers numerous vacation options. If you plan your timing carefully, you can catch the June Crazy Horse Volksmarch  or the July Sturgis Motorcycle Rally held during the first week of the month in the Black Hills and Sturgis, SD. It is said to be the  largest such gathering in the world.  Another option for a few of the Old West is to attend the Sept. Custer State Park Buffalo Roundup. Lastly, you take a drive through the almost 243,000 acres making up the Badlands National Park for a natural view of a “moonscape”. The Park offers the following options:

Whether you like to hike or merely stroll, South Dakota provides a unique blend of history and cultural sights combined with a warm welcome in the present.

For tips on packing, budgeting and tracking travel expenses, check out our free Solo Sherpa available at the App Store and Google Play Store.