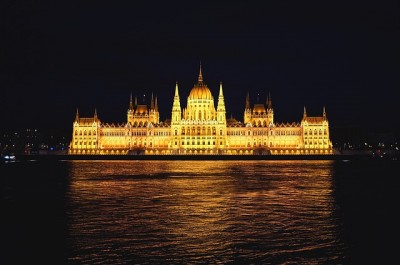 I headed out in late November for a past Thanksgiving for a combined trip to Prague, Budapest and Vienna, three cities linked by the Danube River.

My first stop, Prague, was a really magical city. I stayed near the picturesque Charles Bridge lined with statues and filled with painters selling their wares. The Old City was only a few minutes walking distance. To get my bearings, I took a half-day city tour and quickly identified the top sights starting with the main attraction, the Prague Castle. The original Castle was built in the 9th century AD. The past home of Bohemian kings, the Castle buildings include the St. Vitus Cathedral as well.  If you time it just right, you can see the changing of the guard or enjoy a concert in the complex. The two main town plazas are the Wenceslas Square and the close by Old Town Square. The latter is well-known for its view from the Hall Tower and contains a statue of Jan Hus. However, it is the hourly chiming of the Astronomical Clock which captivates crowds of tourists year round. The historic Jewish Quarter includes, among other key sights for visitors, the Jewish Museum and the Old Jewish Cemetery. Another principal building not to miss is the Old-New Synagogue dating from the 13th century and the oldest synagogue in Central Europe.

One practical challenge presented itself on a rainy, chilly Saturday: getting more local currency. Although my US bankcard worked on banks’ automated tellers, I was initially confounded standing outside the closed door to a local bank on that weekend morning. Passersby had no suggestions as to how to get in to use the ATM. Then it dawned on me: If my bankcard were encoded for electronic funds transfer inside the bank, it would activate the entrance as well. Mirabile dictu: the door opened, and the short term crisis was resolved.

Budapest presented the opposite end of the spectrum from Prague. In the latter, buildings appeared to have been recently repainted almost in expectation of crowds of arriving tourists. Budapest had a more subtle air. The city divided between Buda and Pest appeared confident in its fabled past exemplified by the Heroes’ Square with its central statute paying homage to Hungary’s 1,000 years of history. At the top of my list was the Budapest Parliament, an architectural gem of Gothic Revival overlooking the Danube. Although Hungary is no longer an empire, this was home to the imperial crown jewels. Other tops sights were the State Opera, numerous churches, like St Stephen Basilica and Matthias Church, as well as multiple museums, such as the Museum of Fine Arts and the Hungarian National Gallery. Lastly, a visit to Budapest would not be complete without a tour of the Budapest Castle and a view of the city from Gellert Hill and the Citadel.

Having  been an exchange student in Germany, I was pleased upon arriving in Vienna that I could speak the local language. Of course, that did not prevent every miscommunication. Having not yet checked the city map when I asked about getting to the Opera after dark, I was really embarrassed to discover my hotel was just right across a narrow street from the Opera House. The concierge must have wondered how I could have crossed the ocean but was concerned about just crossing the street in Vienna.

From my schooldays, I had some knowledge of the history of the Austro-Hungarian Empire which gave me a good sense of the must-see sights. Near the top of my list was the Schoenbrunn Palace, once home to Maria Theresa, mother of the more famous, or infamous, Marie Antoinette. After a short subway ride, I arrived just in time for their annual outdoor Christmas and New Year’s Fair.  With its enormous size with more than 1,400 rooms and its historic past residents, this baroque palace was worth a full day tour. The grounds included not only the standard park but a zoo and a maze of hedges where you can watch everyone else get lost or try it out yourself!

Back in Vienna, in addition to the State Opera House, the short list for a city tour ranges from the Ringstrasse, to multiple leading museums, the Parliament and the former Hapsburg and Belvedere Palaces. Whether are not you are an equestrian, you may also want to stop in at the world-renowned Spanish Riding School. One of my personal favorites was sampling the famous Sachertorte in a real Viennese Café at the elegant Sacher Hotel where it was originally created. Although you must travel to Salzburg to visit Mozart’s birthplace, music lovers can visit Vienna’s Haus der Musik and try their hand at a computerized version of an 18th century musical game.

Another key spot on my “to do” list in Austria was a visit to the storied Melk Abbey overlooking the Danube, a relatively short train ride from Vienna. I headed out on a Sunday morning which provided me with one new lesson learned. As in most parts of the world, weekend schedules varied and off season hours were especially limited. I was able to get there and back on the same day but not without a transfer and unexpectedly longer waits between trains. It was still worth the trip in any case. When I arrived at the Abbey, a choir had arrived from abroad and provided a wonderful free concert. After my tour, I looked forward to a hot chocolate with whipped cream on top. In reality, the small train station was closed. While passengers could wait inside, there was no inviting café and not much central heat.  It was still one of the highlights of my stay but a little different than my friends’ summer visit to Melk.

I recommend combining Prague, Budapest and Vienna for a solo vacation because of:

2. The attractive pricing as opposed to larger Western European and US cities

3. The tremendous history and culture in each of the countries

4. The top hotels located in or near the city center in each making sightseeing and/or combining a business trip very easy.

For me, touring during the less crowded off-season worked well. However, if you would prefer sunshine and leisurely outdoor cafes, I recommend you plan a trip during the summer.

For places to stay in the Czech Republic, Austria and Hungary, look at solo-priced and other top values at SoloTravelPricingTracker.net.