Solo Travel Destinations-American South:  During my early childhood days in the US South, each year we had a family road trip visiting cousins and aunts and uncles.

As a child, I was fascinated by the small Alabama town of Eufala. Just riding through, it was hard to miss the endless streams of historic homes. With their wide porches and tall columns, they were antebellum mansions still preserved in the twentieth century. Eufaula is set on the border of the states of Georgia and Alabama. It has been called one of the best small towns in the South.  There are festivals and tourist activities for all ages and budgets year-round. In Decmber, Eufaula features a Downtown Christmas Parade. Next up in the spring is the Eufaula Festival when there are open houses and enchanting gardens open to the public. When summer comes, outdoors sporting events take over. As a result, there is something for everyone.

Eufaula’s history is fairly recent in contrast to Savannah and neighboring older towns and cities in Georgia, the last of the original British colonies in the United States. Eufaula was not settled until around 1816. This was later than much of the South where settlements were formed earlier on the coats or on the banks of major rivers. However, even with this “short” history, there are a large number of historic sites. To date, there are seven hundred buildings in Eufaula which are listed on the National Register of Historic Places. Two top sites are the Fendall Hall and Shorter Mansion.

If you do not find Corinthian columns and Greek Revival architecture enchanting, Eufaula has been named a major bass-fishing spot. The focal point for ardent anglers is the Walter F. George Lake (also known as Lake Eufaula).  Eufaula is also home to a national wildlife and waterfowl sanctuary . For a real adventure, you can even take a selfie with an American Alligator.  Just be sure you are not within range of his leering jaw which is filled with very sharp teeth. If you are thinking about paying a visit in 2021, check here as to see what hours they are open and any restrictions because of the COVID-19 pandemic. Another budget-friendly option is camping and hiking at Lakepoint State Park. 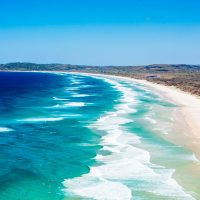 As a child during another family trip, I fell in love with the Gulf of Mexico Coast. It is easy to reach driving from the increasingly popular Florida Panhandle beaches going westward. It is even closer going east from New Orleans.

Biloxi has much to see indoors and out. The nineteenth century Biloxi Lighthouse was built of cast iron in 1848 as one of the first of its kind in the South. While nearby New Orleans is the most famous Mardi Gras site in the United States, Biloxi and the Gulf Coast have their own fabulous celebrations. The Biloxi Mardi Gras Museum captures many of the regal costumes from past parades and balls if you missed the celebration. The local Tour Train makes it easy for everyone to see the entire area easily. You won’t “overtax” your Fitbit on this trip! Foodies will be lured by a visit to Grind Coffee & Nosh.  You can even take an authentic tour on a working shrimp boat to see where top local cuisine gets its start.

Gulfport is the second largest city in Mississippi after the state capital of Jackson. Because of its location, Gulfport has been vulnerable to hurricanes that start in summer and threaten the Coast through the fall. Hurricane Katrina hit the Gulf Coast very, very hard. However, Gulfport has been rebuilding since but is still a key vacation spot.

Two big draws in Gulfport occur in spring and summer. The first is the  “Spring Pilgrimage” which features open houses in the historic district and gardens at their height. July is the Fishermen’s Rodeo”. For indoor options, a popular spot for all ages is  The Institute for Marine Mammal Studies (Gulfport). Other top features range from dolphin cruises to the local Gulf Island Waterpark, and for adventure seekers zip lining high overhead. Don’t forget to take a selfie with the “World’s Largest Rocking Chair”.

During the warm months, there are scores of gleaming white beaches to explore. Whatever the season,  casinos are a popular draw. Like the “Hollywood” or Silver Slipper Casino Hotel, they attract tourists for indoor vacations trying their luck.

Events and Festivals around Natchitoches Parish

This sampling of solo travel destinations-American south would be incomplete without adding Natchitoches to the mix. Natchitoches is the oldest town in Louisiana. Founded in 1714, it was initially a French colony.  Film buffs may even recognize it as the site where the “Steel Magnolias” was shot. Lodging prices are good since there is lots of competition with the town claiming to be the Bed and Breakfast Capital of Louisiana. (For a range of options, go to our Booking.com link  and insert Natchitoches.) For a glimpse of the region’s history, you can take a tour of  the Cane River Creole Park. 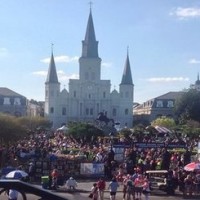 While the Jazz Festival in New Orleans is much better known, check out this northern Louisiana alternative.  If your tastes are a bit unusual, your vacation should include the American Cemetery Tour. Full disclosure: Louisiana cemeteries are popular tourist draws for almost everyone as they are a rich source of local history. Many have above ground tombs and tend to be filled with ornate statues and carvings. Farther south, the early tombstones are in French. They date back to the state’s origins before the “Louisiana Purchase’ ceded the region to the United States.

As solo travel destinations-American South, Florida’s non-beach venues may be overlooked while the state’s tourism focuses on coastal spots. Mount Dora provides an alternative vacation spot. It is nestled in Central Florida on Lake Eustis. While it is not on the coast, Lake County, as it sounds, has ample options for water sports. Waterskiing, swimming and fishing are especially popular. This region was previously filled with orange groves, a very lucrative local business. However, with the arrival of Disney World in nearby Orlando, much of that has changed. Mount Dora is still off the beaten path for tourists and offers a less pricey trip than South Beach in Miami.  For ardent hikers or just plain walking enthusiasts all year-round, both Trimble and Palm Island Parks are a nearby draw. Boating with groups like “Catboat Adventure Tours” and Glide Adventure Tours on segway are other ways to sightsee and let someone else do all the logistical planning.

For other “hidden gems” within the United States, see our posts and packages on:

7 of the Best Southern Cities

Washington, DC: Beyond the Monuments

Looking to stay closer to home this year, see our tips on staycations.