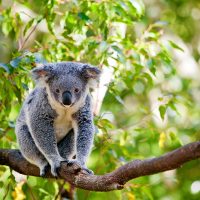 Solo Travel Australia: Australia is a top solo travel destination. Better yet, they have declared one day a year (July 15) as “National Travel Solo Day”.  As winter looms ahead for us in the Northern Hemisphere what better time to reminisce on a fabulous trip I had as a solo traveler to Australia!

After visiting 70 countries, Australia still ranks as one of my top solo travel destinations. The reason? For me, it was familiar enough to be comfortable. However, it was different enough to be intriguing. I was especially keen to see some of the wildlife only found in Australia other than in zoos. In addition, the Great Barrier Reef was a huge draw along with Sydney and its gleaming Opera House.

The sheer distance from the US East Coast to Sydney can be challenging. When I arrived at the airport, I failed to clear the waiting list for an upgrade to Business Class, I found myself in economy. To my surprise, between meals, movies and sleeping, I hardly noticed the long flight. In fact, I was so well rested on arrival, I immediately checked in, left my bags at my hotel and headed out on a half-day tour.

However, for those of you planning to use miles for an upgrade, here are a few things to think about. With flights to  Australia being among the longest in the world, I discovered that many people book six months to a year ahead. In addition, at least with my airline, at the gate, I was rapidly demoted from number 7 to 40+ as those with more miles checked in.  If I had made it through the waiting list, the upgrade required a $1,000 extra payment. Having saved that princely sum, I was able to try out restaurants at a range of prices and take exciting 10 hour day-tours instead.

Traveling in local winter (August), I found excellent hotel deals even at the 4 and 5-star level. (For other options, go to our free, easy to use SoloTravelPricingTracker.net.) I began my stay overlooking the Sydney Harbor at the Four Seasons. I had specifically asked for a view of the Opera House. I expected to see only a postage stamp size view. To my surprise from the 17th floor, I felt as though I were perched on the roof. (On return, I had the same positive experience at the nearby Shangri-La.)

The Sydney Opera House may be the most photographed sight by tourists. However, the Harbor Bridge is an even older icon. It arches high above the city. Looking for an adventure? Don a harness, and take a guided walk along the top. Although I heard guides telling of leading their 70 year old mothers aloft, I preferred to watch from down below!

The Four Seasons was right on Darling Harbor. The Quay is walking distance to just about everything. There are frequent ferry departures to the Zoo as well as Harbor Tours.  A slightly longer walk will take you to Mrs. Macquarie’s Point & Chair which is in a lovely park. St. Mary’s Cathedral and Parliament House are also nearby along with many restaurants and shops.

After the day tour  from city center to the beaches, my two best tours were of the Harbor by boat and the zoo.  I quickly learned to recognize those kangaroo look-alikes, the wallabies. A local resident recounted how these diminutive kangaroo cousins were always foraging in their garden. Like deer at home, they ate the foliage until they were shooed away!

Melbourne was a real contrast from Sydney, much like the contrast between New York and Washington, DC. Melbourne is filled with quaint Victorian architecture as well as modern high rises. I quickly discovered Chinatown, only walking distance from my hotel in the city center. That became my favorite spot for dinner each night.

Melbourne was a prime location for day tours. The first took me along the fabled Great Ocean Road. It was much like California’s Pacific Coast Highway. The second was Phillip Island. It is famous as a nesting spot for thousands of “Little Penguins”. Right after sunset, they make their way in the pounding surf on “rafts”. With the low boardwalk, I could join them as they rummaged around looking for their own nests. A special treat was also seeing koalas in the wild en route. Touching them was not permitted in Victoria since some of the local koalas had contracted diseases from human contact. It was a reminder of how important it is to protect both wildlife and special eco-systems.

Time for Adventure in Queensland:

My next stop was tropical Queensland and off to the Great Barrier Reef. History really came alive on the way to Cairns as I went up the Coral Sea, the scene of a major World War II battle in 1942. When I arrived at the boat for the day trip, I was a real “solo traveler” as the only individual tourist in a group of 201! The Reef dock where we spent the day was a large platform with food service, almost like a small shopping center. As a result, no one had to dive or snorkel. I did opt for the latter although I was one short of the recommended “buddy”.  I managed to make it in and out of the water unscathed and off to join the bright yellow submarine tour.

Before heading back to Sydney, I had one more adventure but narrowly missed a third. I went for a tour and hike in the rainforest. To get there, I hopped on an antique train making its way up a steep mountain incline. After a short trek, I found myself on what seemed the world’s highest gondola. At one point in the clouds, I could hear the birds chirping right outside and knew we were high above the treetops.

As I made my way to the bottom, I caught a glimpse of my first “boat-less” water skiing park. En route to the airport to fly back to Sydney, I went by to check out making my local debut. It was more of a process than I saw from above. Being winter (but fairly mild), the first step was to rent a wetsuit. Before I got suited up, I noticed that the course was filled with tall ski jumps! I decided to add this to my bucket list for my next trip to Australia.

There was still lots left to see after sixteen days. As a result, I highly recommend Australia for the trip of a lifetime because: