Solo Cultural Tours of the South of France

John, our resident expert, highlights solo cultural tours of the South of France. 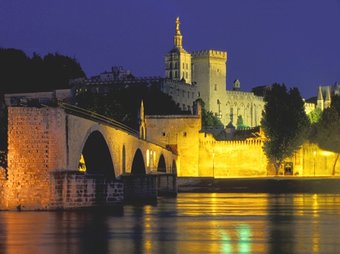 Avignon is known throughout the world and this walled city, set on the banks of the mighty Rhone River, has many fascinating stories to tell and wonderful things to see. Dominating the town is the Palais des Papes (Palace of the Popes).

In 1309, Pope Clement V made the decision to move the papacy and his residence to Avignon. You can only begin to imagine the unrest this caused. It gave France a strong position in church matters. Another five Popes followed Clement until  13 September 1376,when  Pope Gregory IX made the decision to return both the papacy and his residence to Rome, where it has remained ever since.

However the stunning legacy of these 67 years is well worth a visit and the hunting lodge of the Popes, called Chateauneuf De Pape, which is only a short distance away, lends its name to some absolutely stunning wines. Although now just a ruin, the little village is also worth a visit (as well as some wine tasting). For those of you with a sweet tooth there is also a chocolate factory on the outskirts of the village where you can a get a bottle of Chateauneuf de Pape, filled with chocolate.

In the wider scheme of things, it is quite amazing that these three “masters” of the art world all had connections within a short distance of each other. Avignon to Arles to Aix en Provence is a relative short distance and forms a rough triangle.

Van Gogh arrived in the South of France, Arles to be precise, by train at midnight on 21 February 1988. The next two years, first in Arles then St Remy de Provence, is considered his most productive and inspired period. It is amazing to follow in his footsteps and see some of the sights that he immortalised in his paintings.

Just along the road, under an hour, is Aix en Provence a wonderful little town steeped in history and the birthplace of Paul Cezanne in 1839. Although he left for Paris he returned to Aix and also produced his great works under the Provencal sun. The subject of a number of his paintings was the mountain that dominates the skyline, Montagne Sainte-Victoire. His studio is worth a visit. He is buried in the local cemetery.

Interestingly, as well as living in Avignon during the first world war, Pablo Picasso, bought a Chateau near Aix and at the foot of Montagne Sainte-Victoire in 1958, called Chateau de Vauvenargues. It is said that whilst Picasso called Cezanne the “father of us all” in reference to his artistic influence, he said of Chateau de Vauvenargues “Cezanne painted it (Montagne Sainte-Victorie), I bought it”. Picasso earned enough money in his lifetime (as opposed to Van Gogh who sold only one painting in his lifetime) to buy several properties in the South of France, however it was in the garden of Chateau de Vauvernargues that he was buried in 1973.