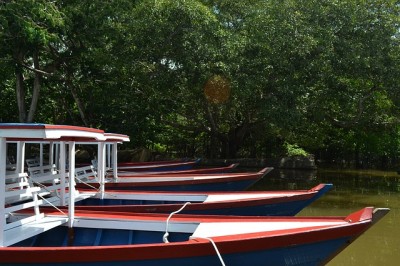 Looking for an alternative to “Home Alone for the Holidays”, I began checking out river cruises. My prior cruise on the Nile had worked well for me. As a solo traveler, I liked the fact that meals, transportation and sightseeing were taken care of while the small ship offered travel companions but with the privacy of my own cabin.

To narrow it down, I scanned my bucket list and immediately chose an Amazon River cruise. That left India and SE Asia as next on my list but too far roundtrip for Christmas week. I selected Brazil since most of the Amazon rainforest is located there although other options were via Peru and Colombia. (At least five other countries claim at least a piece of the Amazon.)

Although there were no non-stop flights available, Miami and Houston are gateway cities for frequent flights from the US to the capital of the Amazon, Manaus, bypassing both Rio de Janeiro and Sao Paolo. An intriguing option, in my view, was the opportunity to connect through Panama. The flight’s layover of 17 hours gives ample time to check into a Panama City hotel for a good night’s sleep with time left over in the morning for a walking tour.

Having traveled five times to Spanish-speaking Latin America, in researching this trip, I discovered how little I knew about Brazil and specifically about the Amazon.

My first misimpression was of Manaus.  I had envisioned the Amazon starting point as a quaint village with small planes landing on short runways as I had in African game reserves. In reality, the metropolitan Manaus area, with its own Belle Epoque opera house, has over 2 million inhabitants, a choice of 5-star hotels and frequent air buses arriving from abroad.

Secondly, I had always thought of the Amazon as home to just one river, famous as second in length only to the Nile. In fact, there are three others in the Brazilian Amazon: the Rio Negro, Rio Solimões and the Río Jauaperi, each with their own characteristics.

A third surprise was that the Amazon Basin, deep in the rain forest, is not uninhabited.  It includes villages of up to 15,000 inhabitants. Novo Airão, for example, on the Rio Negro, is an active boat-building center.

The Amazon Basin is a leading ecotourism destination for the rainforest itself and the array of wildlife, including one-third of the world’s birds.  Species range from the more welcome sights, butterflies, iguanas, monkeys, manatees, to snakes, the latter not always a crowd-pleaser. Rarer sights are the pink dolphins and the capybara, a 150-pound rodent, which fortunately looks like a giant guinea pig rather than an oversized rat.  Leaving behind honking horns, the greatest “noise pollution” appears to be from howler monkeys, hopefully reserved primarily for the daytime. Foliage in the Amazon is supersized looking like a set made for a science fiction film. The kapok tree can grow to 200 feet in height, and water lilies can reach 7 feet in diameter.

Night time exploration does allow for a change of pace and a view of nocturnal animals. However, you wouldn’t want to take a break under a tree without keeping a vigilant eye out for low-hanging squirrel monkeys or other tree-dwelling mammals. A swim is not recommended either unless you want to get up close and personal with a hungry caiman floating through the river looking for prey.

If time permits, Manaus is also well-positioned to connect afterwards with Brazil’s beaches or an island holiday returning via Aruba before facing the bleak winter weather above the equator.  For western bound travelers, history or archeology buffs, a connection via Machu Picchu may hold more allure.

A few spaces remain. For more information, go to: https://solotrekker4u.com/travelpackages.php?catopt=Green%20Travel_Wildlife%20and%20Ecotours .