Solo Travel Destination an Amazon Adventure. The debate continues: Which is longer: The Amazon or the Nile River? Having previously explored the Nile, my choice was clear: Off to Brazil for an “Amazon Christmas”.  My Amazon adventure would begin with a flight from Washington, DC to Manaus, the capital of the Amazonas state. Under various names, the Amazon River touches upon 6 countries from its mouth in Peru until it flows into the Atlantic Ocean in Brazil. Along that route it combines with multiple tributaries, the largest being the Rio Negro, my destination. Traveling solo, I would join a small group on a motorized yacht to go up river for 8 days. 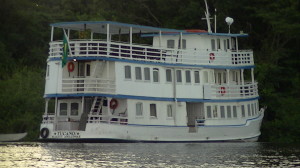 Armed with malaria pills, combination insect repellent/sun block and a bright yellow slicker, I had planned for every contingency. However, en route a fellow passenger surprised me voicing a concern of being up the river “10 hours by “fast” boat from the nearest hospital”.  I marveled at her adventuresome spirit. How little did I know! In orientation aboard my riverboat, the local guide then surprised me by pointing out: “Be careful. We will be 10 hours from the nearest hospital.” A serious accident even by an otherwise healthy, fit passenger would require the boat and all its passengers to return to Manaus. The other passengers could then figure out next steps for the balance of their trip.  I took this to heart on mornings pre-dawn when I foraged for coffee on the upper deck.  While holding on tightly to the railing with one hand, I looked out into a completely opaque vista. This was no time for a “man overboard” exercise.

Having heard about “dangers” in the Amazon, I was relieved that nothing serious materialized. The Rio Negro’s acidic waters, according to the guide, prevent mosquitoes from actively breeding in some areas, but malaria/other safeguards are still important. The void was filled by enterprising ants and wasps.  On arrival in Manaus, while still in the hotel, I discovered an entire colony of “uninvited guests” in my carry on bag. They were feasting on a smorgasbord of virtually invisible crumbs from a prior trip. I emptied it out and carefully zipped it up. No more ants! Wasp nests were the size of footballs. If you did not bump into them, you could pretty much live and let live.

Rather than poisonous snakes or oversized lizards, my greatest challenge was avoiding a sunburn. Having brought #30 sun block, I quickly discovered I needed #50. I tried sunhats and scarves but still went home not quite a lobster but with more of a pink glow than when I arrived.

A special highlight was the usual evening canoe trip. 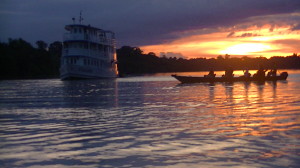 Journeying into a complete void, we were serenaded by a chorus of lively frogs. Without the reflected light typical in urban centers, only the stars overhead and an intermittent spotlight showed the way. My unspoken fear was that a low-flying bat would get tangled in my hair and desperately flail around trying to get free.

That never happened, but in shallow water, fish paid an occasional surprise visit to the canoes.  Fortunately, one such visitor, a Dogfish did not bark but could bite. Luckily, it missed its chance for an extra meal!

December was the beginning of the “rainy season”. I was still determined to forge ahead. The rains, although heavy, were infrequent and short-lived followed by bright sunshine. Predictably, it only rained when I (or others in the group of 15) had forgotten to bring rain gear. Overconfident my last day in Manaus, I made my way sans slicker to a wildlife reserve. I ended up stranded at a picnic table under a small metal roof for an hour watching buckets of rain falling. As always, as quickly as it came, it was gone again, and I was reaching for my sun block.

The Road less traveled by:

Favoring the “road less traveled”, I was pleased that the journey up river was not the predictable tourist route. Until the last day’s return closer to the capital, no other tourists were traipsing nearby through the rainforest. Only one or two comparable small tour boats passed us during the first 6-7 days.

Exploring the rainforest was more complicated than I initially realized. 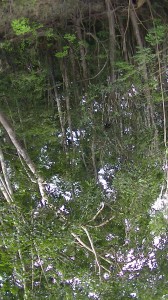 With 4 ecosystems, it has to be viewed on different levels simultaneously. On the ground and at waist height, you can see a myriad of fruits, foliage, certain smaller animals and insects.  At the same time, the overhanging canopy is largely the domain of monkeys, sloths and birds, the latter visible at all levels.

Our guide expertly wielded a machete cutting a path where none existed.  With my head down trying to avoid tripping over roots, I had to alternate looking up to duck below low-hanging branches. Since the rainforest had a unique way of “greeting” explorers, long-sleeved shirts, long pants and leather gaiters were needed to avoid cuts and scrapes even in the tropical heat and humidity. Trees and bushes with sharp thorns were frequent along the route. To catch myself from falling, I automatically grabbed the nearest tree and learned my lesson the hard way having been rewarded with a handful of pricks. Although unwelcome, this was not toxic like the legendary poison darts, copies of which these days are purchased by tourists.

As the journey up river continued, Christmas Day arose again pre-dawn with a canoe trip and a stop at an uninhabited village. It was especially interesting as it contained the only ruins of Brazil’s colonial past which I saw. After a swim in the Rio Negro, it was time for a turkey dinner for my most unique Christmas ever.

My unconventional holiday was finished off by a particularly exciting evening canoe trip. The guide spied a small 3 foot caiman, a young “cousin” of the 16 foot long Black Caimans. The guide quickly jumped into the river to “invite” the caiman to join us briefly in the boat.

Back to the capital, Manaus:

Returning to Manaus felt like coming home. It was back to watching the Capybara being fed at the Tropical Zoo and wandering for a half day through the wildlife/science research center at the Bosque da Ciencia.

The 8 days with no Wi-Fi and infrequent cell phone coverage going up the Rio Negro provided a step back in time. Although a deluge of email messages awaited my return, it was exciting to be officially “incommunicado”, a first for me in a decade.  Just as I had learned not to push the doors marked “pull”, it was time to go home and retrain myself as to how things worked in my own house.

When I was in the Amazon, the extraordinary became routine: Seeing the sun rise and set from a low lying canoe and making a daily trek through the dense rainforest. 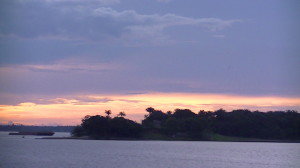 I realized how unique it was on re-entering the US. The immigration official asked the purpose of my trip. He looked really puzzled when I promptly replied: “An Amazon Christmas”!  Besides providing memories for a lifetime, my Amazon Adventure gave me a better understanding of this complex ecosystem and its special wildlife.

For more on this Solo Travel Destination an Amazon Adventure, go to our travel packages.  For other options, please go back to our home page. Use our Booking.com search box for specials up to 42% off. Be sure to check out the verified solo travel reviews.