Solo Travel Destinations Cambodia: Adventure and cultural travel combined.  While the COVID-19 pandemic is blocking most travel abroad, we can still dream and plan for the future. In the count down to my top trips of a lifetime, my “Cambodian Christmas” was close to no. 1! While my prior flight to South Africa was the longest non-stop in the world, my SE Asia journey with connecting flights did seem endless! My plan was to fly out on Christmas Day for my solo female travel adventure. That gave me a chance to have a traditional Christmas Eve at home in Washington, DC but with New Year’s in Phnom Penh, Cambodia! Having braved the crushing crowds flying overseas on a Christmas Eve, I did find a much smaller crowd on the 25th!

Do plan early if you want to travel to Cambodia.

At noon on Dec. 25, I lined up for my Air China flight at Dulles Airport. I managed to sleep en route to Beijing, but at a race to catch my next flight. One  problem that occurs with connecting flights abroad is that going through Passport Control can be very slow. Worse yet, after an overseas flight in a wide bodied jet, my smaller regional jet was in a far away terminal. Four to five hours later arrived in Bangkok, Thailand late night to sleep for a few hours at a very luxe 4-star Novotel Hotel at the airport.

The next leg of the journey started mid-morning as I flew from Bangkok to Siem Reap, Cambodia, one of the top tourist destinations in SE Asia, means “Siam defeated”, referring to the ancient name for Thailand. Their centuries’ long battles continued until Siam retook the Khmer capital of Angkor, the site of the fabled Angkor Wat temple complex.  As I traveled through SE Asia, I was surprised to see how much the temples and palaces remaining in both countries today looked alike! Interestingly, in Thailand, I found a large miniature model of Angkor Wat was on display!

Not unlike today’s COVID-19 pandemic, the highly lethal Ebola Virus, primarily in Africa was threatening to spread around the globe. So when arriving in SE Asia from the United States, I had to answer a questionnaire as to Ebola. Luckily, I made it quickly through and found a very helpful cab driver and local guide. The next day he gave me a great authentic feel of the area from Angkor Wat to my lunch at a popular local cafe. As a solo and apparently the only foreigner, I was later joined by an Australian tourist. Since we shared no common language with the staff, they very kindly led us through pointing at photos of food and our befuddled attempt to figure out the coins and bills when it came time to pay. My Phao, my guide, strongly recommended I join the other local diners for an after lunch siesta in a hammock. 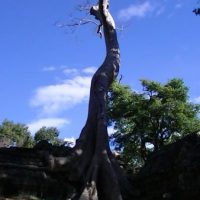 Before the day was over, it became time to visit an array of temple ruins, not as famous as Angkor Wat. My favorite was the “tree temple”,  Ta Prohm. As it sounds, it is known for its tall tree growing through what roofing remains. Film buffs know it as the site for many scenes shot with Angelina Jolie in “Lara Croft: Tomb Raider”. I was surprised to find out in exploring the Siem Reap area that early temples were Hindu. In later centuries, temples were Buddhist which is the main religion in Cambodia today. 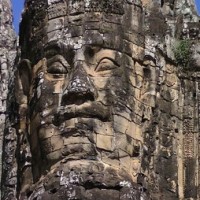 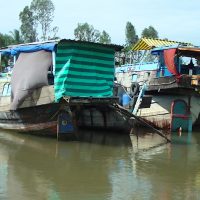 As a solo female traveler, I have been a long-time fan of river cruise and small ship expeditions. They are great to have a ready-made group for meals and touring. With my solo cabin, I was also free to have time alone when I wanted it. Today there are some real “deals and steals”. How do you grab one? Go to our our free search tool, the SoloTravelPricingTracker.net. Under “Tours”, you will find cruise lines that are offering unheard of low prices with no single supplements.  For more packing tips, lists and expense tracking, see our free app, the Solo Sherpa. It is available at the App Store. For Android devices, go to Google Play Store.

For my Mekong River cruise, the ship was a true floating hotel. It had all the luxury and services of a 5-star lodging. My cabin came with an en suite bath room, a balcony and a second “French balcony”. While SE Asia can get hot, the ship had full air-conditioning even in the hallways! Meals were made up of a top buffet of international dishes and wickedly good deserts.  It made life back home seem almost austere by comparison!  The hardest part? Coming home and cooking my own meals, cleaning up and doing the laundry.

One of the first things I learned was that on river cruises water levels make a difference. We were to start at the Tonie Sap Lake near Siem Reap. When that did not work, I joined the remaining 100 or so passengers on one of the rockiest road trips of my life. I was near the back of the bus. After an hour or so bouncing back and forth, I was glad to see the drive come to an end at Prek Kdam.

As a solo traveler, I quickly made three new friends. Two of the women were from Alaska and the third one was from California. We formed a team for meals for the rest of the trip. There was never a dull moment. It ranked right up there with Nile Cruise. Luckily, the Mekong River cruise failed to have an  “international belly dance competition”!

Like many river cruises, the Mekong was narrow enough in many places for taking selfies. As we glided past tall pagodas, it was the perfect setting. 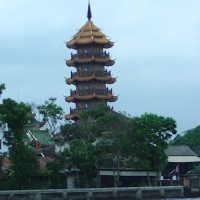 Our first views were small fishing villages as we made our way to Kampong Chhnang, a major local town. It is famous for its floating village. In addition, to floating homes, there was a general store open for business, and family dogs gazing at passersby.. 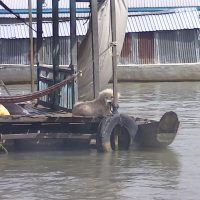 One of the major highlights of the river cruise was a visit to the former capital, Oudong. It is now a UNESCO World Heritage Site. We were guests there for a private meeting at an ancient Buddhist monastery. Dating back to the 5th century, Buddhism is the official religion of the country with 97+ percent of the population Buddhist. I was surprised to learn that many young boys serve as a monk for a short time. This is common rather than its being a life long vocation. 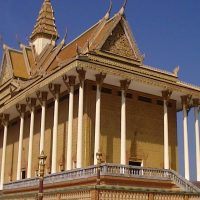 As a city dweller, I was partial to Phnom Penh. I found Cambodia’s capital the most intriguing blend of ancient and modern cultures, elegant colonial architecture and historic palaces and temples. Like many national capitals, the city is set on an embankment. As the Mekong River glides through town,  a wide boulevard creates a pedestrian walkway.  It is not as grand as the  Promenade des Anglais in Nice. However, it is still impressive.

Trend setters and fashionistas will find some real finds in local silk. I quickly found out that it had the same quality and style as world famous Thai silk but at a much lower price!

One warning: In Phnom Penh and many SE Asian cities, moped and motorcycles make it almost impossible to cross the streets. There may or may not be traffic lights. You just have to brave it. Then watch out, and hope for the best! You may fare better by following the local residents. Do watch out for cars as well. Strolling across from the river in bright sunlight at noon, I suddenly felt something bump my right leg. When I turned to look, I saw that a car had backed into me! I doubt the driver noticed. He simply moved forward out of his parking place and went about his business! Luckily, I was not hurt.

Phnom Penh is ideal for a walking tour. The first excursion took us to Wat (Temple) Phnom. It is the tallest religious structure in the city. It was built in the 14th century and must have been a huge engineering feat. In addition, without modern high rises, its height would have seemed even more remarkable.

One of my favorite walking tours in Phnom Penh was a visit to the Royal Palace and the Silver Pagoda. Unlike many European palaces, the SE Asian Royal Palaces were compounds comprised of multiple buildings. The resulting village would always include a temple.  The Royal Palace in Phnom Penh was built rather later in 1866. In Phnom Penh’s Royal Palace, the most famous feature is the Wat Preah Keo or Temple of the Emerald Buddha. It is also known for its Silver Pagoda. The latter’s name comes from the floor which is covered with tons of silver.  While the temple is named for the Emerald Buddha, it has many other statues of Buddha in an array of metals from gold to bronze. They are impressively decorated with gleaming jewels. Most striking was the solid-gold Buddha covered in more than two thousand diamonds. One of which was 25 carats!

A very different  tour was available to the “Killing Fields” and the Khmer Rouge’s S21 Detention Center. Much has been written about this brutal period of Cambodia’s history in the 1970’s. In short, a coup overthrew Prince Sihanouk and brought the Khmer Rouge to power. Up to two million people may have died before the regime’s 1979 downfall.

After Phnom Penh, we sailed on to the border crossing to Vietnam. While I was excited about the adventure ahead, I had fallen in love with Cambodia and wanted to stay! While travel restrictions in 2021 are challenging, add this alluring destination to the top of your bucket list going forward. You will be pleased at the low, low prices, and find a warm welcome and endless ancient sights to explore!

For more information for 2022 or late 2021, see  Cambodia Tourism and for customized day tours, click here.