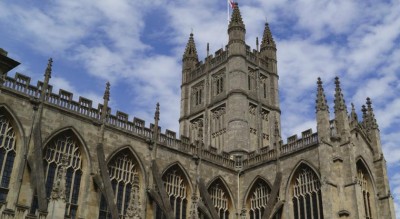 With the holidays approaching, it is time for fun facts about weird and wacky celebrations around the world:

In the Czech Republic, a Christmas Eve tradition before the invention of online dating, single women had a tried (and true?) way to know whether romance was coming their way in the next year. Caveat: This could be dangerous to unexpected visitors! The process was as follows: Single women would start by turning their back to their door and throw a shoe over their shoulders. If the toe of the shoe faced the door, time to get out a wedding planner. Not so much if the heel was turned towards the door!

As a student on an art history tour of the UK’s West Country Gothic churches, I marveled at the beauty of Bath’s Royal Crescent, majestic Abbey and parish churches.

However, I wrongly thought that we solo travelers would never find well-priced 4-star lodging in Bath for the holidays. The good news? Using our  Home Page Lodging Search Engine today, I found many listings, including a number for under $200, rare for the UK and Western European holidays.

What does Bath offer for a magical Christmas and New Year’s?

There’s something for almost everyone!

The famous Bath Christmas Market features 170 stalls or rather “chalets” teeming with gifts. Unfortunately, it does close early so do check!

There’s still lots to do and see in this UNESCO World Heritage Site starting with the fabled Bath Abbey and the 2,000 year old historic Roman Baths or try out the Thermae Bath Spa set on a rooftop!

Visitors to Bath always make time to stroll the Royal Crescent, the classic 18th-century gem of Georgian architecture comprised of 30 row houses, Number 1 which is now managed by the Bath Preservation Trust.

For a lively adventure, try the Escape Room to hopefully make your exit in time for the New Year.

Traveling from the US and  longing for a little bit of home for the holidays? Visit Bath’s American Museum in Britain.

The architectural jewel of Bath is its storied Abbey. Initially built in the 7th-century and rebuilt twice by the 16th-century, the Bath Abbey is likely the West Country most famous Perpendicular Gothic structure with its soaring fan vaulting.

Try the New Year’s Eve Ball at the Roman Baths and Pump Rooms and then watch as the fireworks herald the New Year!